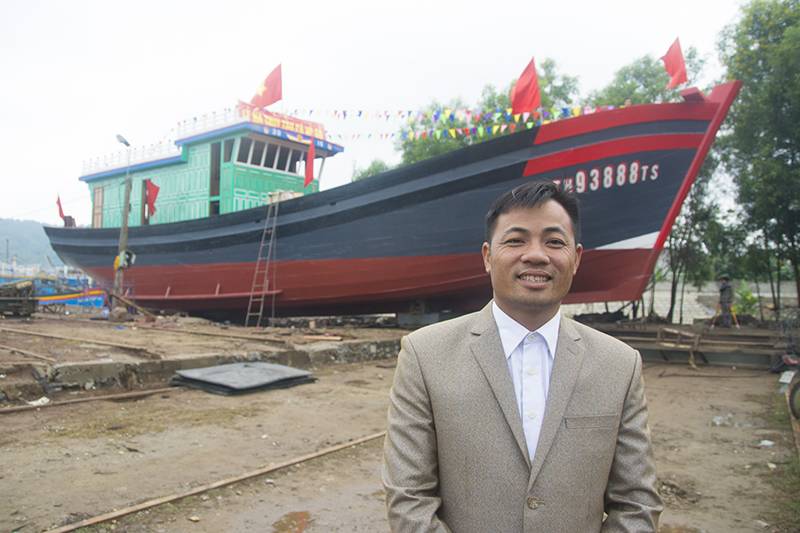 True to its reputation as a nation capable of overcoming all obstacles, Vietnam is rebuilding its aging fishing fleet. Through a government subsidized loan program, designated by Decree 67/ND-CP, fishermen are building boats along 28 coastal provinces from north to south of Vietnam.

Captain Trinh Van Hung grew up in a fishing family, and after completing his education, he briefly fished with his father. His curiosity leads him into business as a merchant, but the call of the sea is strong. At 25, he returned to fishing. After taking navigation courses at a marine institute, he went straight to work as captain of his own ship. It was a few years ago and the fishing was good for him. He currently owns two 23m by 5.5m boats.

Huang was accepted into the government program to augment the fleet. Keeping him in the family, he moved closer to his brother-in-law, Mr. Nguyen Van Tuyen, owner of the Tuyen Phong shipyard in the village of Hòalôc, in the province of Hâulôc Thanhôa. The yard is renowned for the quality of its large wooden boats. Captain Hung got the design for a wooden ship 26 meters by 6.2 meters with a molded depth of 3.1 meters.

It is larger than his current boats and will be perfect for his driftnet tuna fishing. A typical tuna trip will take him 150 miles south of central Vietnam where he fishes offshore with a crew of 12. The gear is a multi-segment gillnet 60 meters deep by 70 meters long per segment. The mesh size varies from 10 centimeters at the top, to 15 cm. in the center and 20 cm. in the deeper sections. Tunas range from 3 to 25 kilos. They are not bled on board but are individually wrapped in plastic and iced in insulated tubs. Trips are limited to four or five days at sea. Although fishing is permitted year-round, catches are best from the first lunar month to the seventh lunar month.

In Southeast Asia, converted second-hand generator engines power many fishing boats. In order to qualify for the loaner program, the new boat must be fitted with a new, purpose-built marine engine. Cummins NTA855 engines, which he has enjoyed well service, power Captain Hung’s other two boats. For his new boat, he opted for an American-made Cummins KTA19 M4. Rated at 700 HP to qualify for a government fuel subsidy, this will give the new boat ample power and will generally run below the specified 2100 rpm. The main engine will spin a 1.9 meter propeller through a Hangzhou Advance gearbox with a 6:1 reduction. A PTO on the main engine will power a hydraulic net puller. A small 10 kW generator will meet the vessel’s electrical needs.

The tradition of wooden boat building is still strong in Vietnam although quality wood is increasingly difficult to obtain. Both for the framework and for the planks, the yard imports round logs from Laos and saws them on its own mill. This efficient machine is equipped with a large electric band saw that runs on tracks along the entire length of the log. For framing, it is adjusted to produce a 24 cm. Framework. For planking, the saw is adjusted to six cm. thickness.

As it’s the whole world, the day of the launch deserves a little ceremony and the village of Hòa Lôc does it well. The artists sang in front of a large poster celebrating the shipyard and the construction program. The public of officials and fishermen sat under spectacular colored tents while others gathered around boats in the yard to chat and do business. Linh Cam Nguyen, Cummins sales engineer in Vietnam, and Luu Xuân Anh, Cummins dealer, were present. Mr. Nguyen Duc Cuong, a representative of the Department of Fisheries of the Department of Agriculture and Rural Development of Thanhhoa Province, explained that the province has an allocation of 65 new boats, of which 16 have been approved and six had already been completed. As the safety of fishing fleets is a major concern, he added that the Vietnamese government is developing a new communication system to link all boats.

Festive tents stood out against the gray winter weather. Nearby, the black-hulled mass of the 26-meter boat waited patiently in its launching cradle. When the chants and speeches were over, Captain Hung gave the signal. Rockets hurled down showers of confetti, the flags mounted around the boat’s gunwales flapped briskly in the breeze, and the cart began its slow descent to deliver the new boat to its element. A boat launch is always a beautiful thing, but launching a large wooden boat in our time is truly spectacular.

The pragmatically named TH9388TS floated evenly with room to its waterline. There would be more added weight as it was fitted alongside and it would stay perfectly on its mark when cruising to the fishing grounds in time for the Lunar New Year. Near the launching ramp, a sister-ship was entirely framed with solid, bolted, solid wood. A new Cummins engine was on the way, and in a few months the Tuyenphong shipyard would be celebrating another launch.