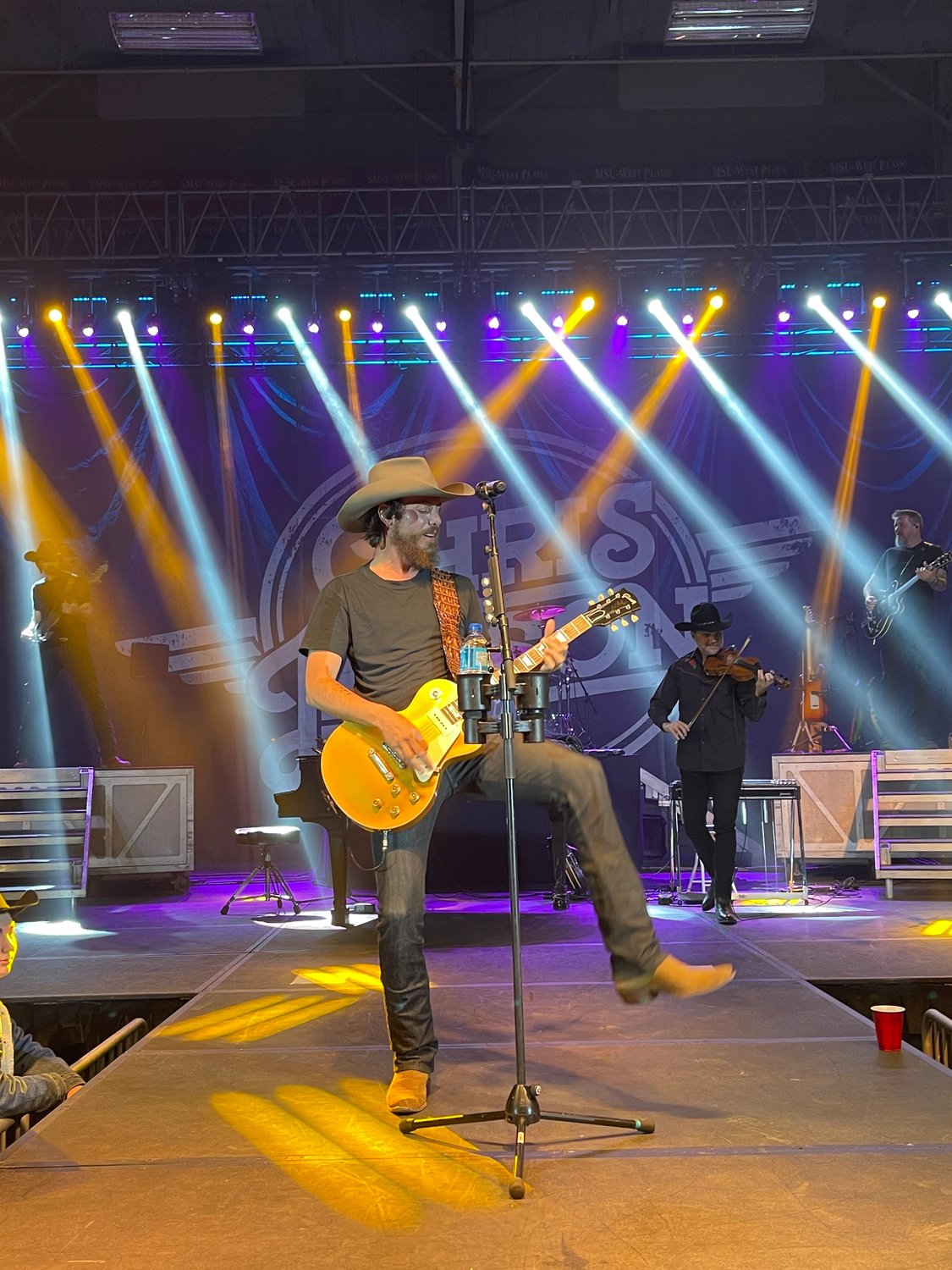 Chris Janson of Missouri returns to his home state this week for the Bass Pro Shops World Fishing Fair in Springfield. Its opening ceremony took place on Tuesday, March 29, and the event features the world’s largest fishing show and sale, with appearances from outdoor professionals, celebrities, NASCAR legends, seminars and shows- Concerts for Conservation benefit. The Perryville native will take the stage on Friday, April 1, along with Luke Bryan, Dierks Bentley, John Anderson and Lindsay Ell.

“Coming back to Missouri, of course, is great,” Janson said. “No matter where I am in the state, I feel like a home guy, which is good. I’m very proud of where I come from – the state I was born in and in which I grown up, my Midwest values ​​and that’s all Bass Pro stands for as well.

The Concerts for Conservation portion of the World Fisheries Fair will donate 50% of ticket sales. It’s another effort that strikes a chord with Janson.

“My relationship with Bass Pro began many years ago when Wonders of Wildlife officially opened,” he added. “Coming back kind of culminates and it’s going to be really good to rekindle that original reunion flame that we all had…that’s where my friendship with Johnny [Morris] started.”

He previously teamed up with Bass Pro Shops for the sale of a limited-edition signed Chris Janson hat. Proceeds from the Trucker Hat Collaboration are donated to support three of Janson’s favorite Tennessee-based nonprofits committed to protecting wildlife habitats and helping those in need – Tennessee Riverkeeper, Harpeth Conservancy and Hunters for the Hungry.

During a February show on Janson’s Halfway to Crazy Tour, Janson took the stage at the West Plains Civic Center, wearing the collaboration.

“The Bass Pro signature hat has been really amazing. We’ve been able to really help raise funding for some important conservation charities here in Tennessee and across the country. So it’s a pretty remarkable deal,” he said, “I’m grateful for this opportunity. Johnny Morris is one of my best friends… not only working with him, but having a friendship is something that’s close to my heart.”

As a boy from Missouri getting his start in country music, he always believed in himself as an artist. According to Janson, he was at a crossroads in his life after high school and was weighing the options of college, work, or “work-play,” what he calls his career as a multi-platinum entertainer.

Pulling the trigger and moving to Nashville, “I had no fears or worries or anything,” he said. “I just slid into my car and went there on a random Thursday. And you know, what most people would call roughing… I just called living. And it was pretty amazing.

Janson signed his first recording contract in 2009 and took advantage of every opportunity that came his way. He returned to songwriting, penning lyrics like the 2012 summer anthem, “Truck Yeah” for Tim McGraw and the title track from Justin Moore’s 2013 album, Off the beaten track.

“It was really the entertaining aspect that launched my career and it was the first thing I believed in myself for… it paid off, thankfully. I’m just grateful for the opportunities I was given” , he explained, “I got back into songwriting a bit later in the game and eventually started getting some big hits…that really put me on a trajectory.”

Janson self-released “Buy Me a Boat”, in early 2015, which reached number 1. Over the following months, Janson released his debut studio album, also titled buy me a boat.

“I always knew it would turn into a career. If you work hard, it’s like you’re sure to earn something. If you put in enough work, in any area of ​​life…So I just put in the work and prayed really hard,” he added. “At this point in my life, all the dreams and goals I had set for myself, I achieved them, and then some… so anything else I think is icing on the cake.”

In September 2017, Janson released his second album, titled Everybody with its first single “Fix a Drink”, reaching No. 1, followed by “Drunk Girl”, which won an ACM award in 2019 for video of the year. Janson also found success with his third studio album True friends, which came out in 2019 with the No. 1 hits “Good Vibes” and “Done.”

Despite the success of his own music, Janson regularly wrote hits for other artists. In 2015, he co-wrote LoCash’s “I Love This Life” and Randy Houser’s “Song Number 7” the following year.

“I love ‘I Love this Life’, and more recently I wrote one that’s on Cody Johnson’s new album called ‘Build a Fire’, which I’m pretty proud of…Cody did a great job on it so I was grateful,” he added. “I think one of my all-time favorite songs I wrote for someone was ‘How I’ll Always Be”, for Tim McGraw.”

Janson’s songwriting touches many people, but it is almost always autobiographical. When asked which song he is most proud of, he refers to a song called “Redneck Life”, also on Everybody.

“It’s about as autobiographical as it comes…you talk about the early days of Chris Janson and the life I lived and the things I saw as a kid…” Redneck Life,” embodies that very much,” he laughed. “All of my songs are mostly true stories, but this one in particular is totally badass and just on point. I’m also really proud of my latest singles ‘Hey Mom’, and of course, ‘Done’. is one of my all-time favorite songs I’ve ever done…no pun intended. I’m really proud of everything I’ve been a part of and I love my job. I’m grateful.”

“I had invited Keith Urban to come over and be one of my special guests that night, and I knew he was coming so it was going to be awesome,” he explained. “It would be a big surprise for the crowd, that sort of thing. Well, he showed up, we did our thing. We surprised the crowd, everyone was super happy. And then all of a sudden I think he’s about to leave the stage and they pull out an Opry mic stand behind me…then Keith invited me to be in the Opry.

Pride echoed in Janson’s voice as he continued: ‘Fast forward a few months down the road – it was Garth Brooks who inducted me. I think it was one of the most humbling experiences of my entire life and maybe one of the coolest for sure. I am a proud member… I am the 215th member of the Grand Ole Opry.

Janson self-wrote all of his own songs and said, “He always did, except for one on this new album…which is totally ironic and out of left field, but I recorded a song that my friend Eric Church wrote for me and we did a duet on it.”

The duet is titled “You, Me & the River” and marks the first song Janson recorded that he didn’t have a hand in writing. Janson’s fourth studio album, All-inis set to release on April 29 and is available now for pre-order.

The album’s lead single, “Bye Mom,” continues to connect with audiences as a masterfully written song. According to Janson, it derives from the true story of co-writer Brandon Kinney, who lost his mother at the end of 2020. It started as a tribute but turned into a universal song about loving someone. more than oneself. Earlier in March, Janson released “Keys to the Country,” ahead of another sold-out performance from Ryman.

“Johnny is one of my best friends ever. I love him like a brother…like family and couldn’t be more excited to be a part of the World Fishing Fair,” he said. he said, “Any Bass Pro event is a class act, a five-star event for everyone, all ages, and all walks of life. I couldn’t put my mark on a better company and I couldn’t ask a better company to put their mark on me. It’s a real honor to work with a great American company like Bass Pro.