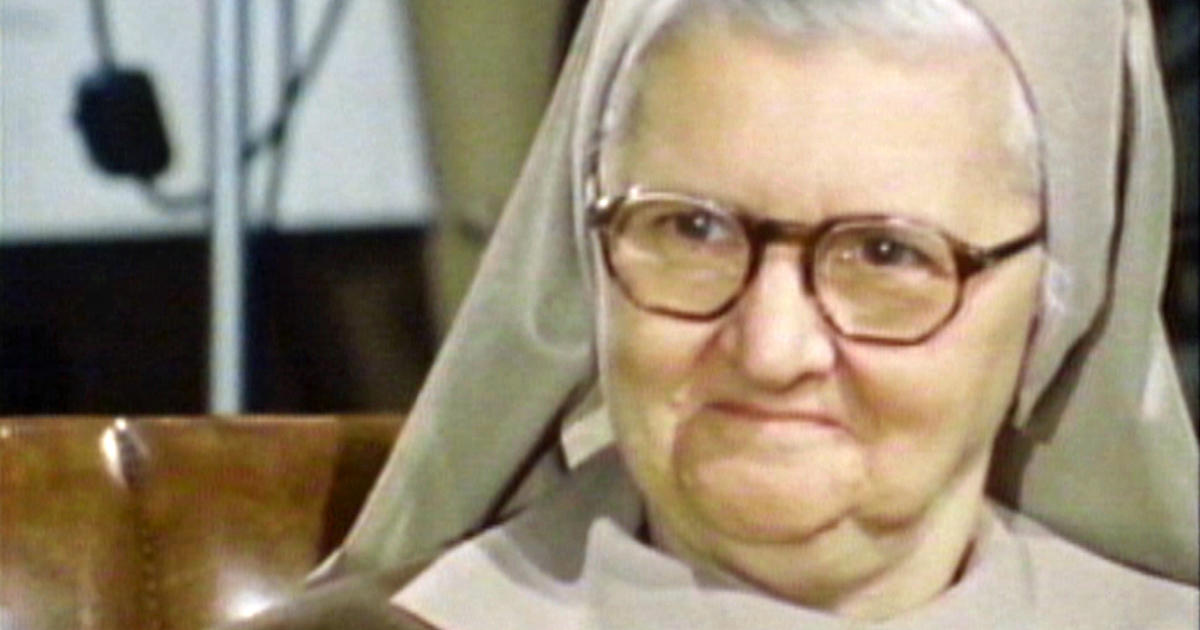 The nun who started a television network

“Nuns cloistered on television are, without a doubt, one of the most ridiculous things that could have happened.” That’s what Mother Mary Angelica, who died on Easter Sunday at age 92, laughed at 60 Minutes in 1985. Yet Mother Angelica ruled a worldwide religious media empire for nearly 20 years. How it all began ? “It just evolved,” she said.

As correspondent Morley Safer explains (full story in video player above), Mother Angelica was the Abbess of Our Lady of the Angels Monastery near Birmingham, Alabama, which then housed 14 Franciscan nuns. They spent their days in prayer and contemplation – with the exception of three evenings a week, when Mother Angelica took to the air as the host of Mother Angelica Live, a popular TV show on the Eternal Word television network, which ‘she founded.

Mother Angelica told Safer that she was first inspired by a visit to Channel 38 in Chicago. “I walked into this little, tiny, tiny studio. I had never seen a studio, a TV studio before,” she said. “But I remember standing in the doorway and saying, ‘It doesn’t take much to reach the masses,’ and I said, ‘Lord, I’ve got to have one. “” So she had a studio built on the grounds of the monastery.

By the time she appeared on 60 Minutes in 1985, her local network reached nine million homes in 37 states during prime time, seven days a week. Now known as the EWTN Global Catholic Network, its 24-hour programming reaches more than 264 million homes in 144 countries, according to the network. It also operates satellite and Internet radio stations, a newspaper and a publishing company.

Learning to watch television took some time, she told Safer. “Most people haven’t given us six months,” she said. But she enjoyed her new role, performing the Bible, welcoming guests, and providing folk advice to those who called. “I just want people to know that their God is a God of love, that he sometimes has to laugh at the things we do, and I think he has a good sense of humor,” she said. declared.

Sometimes her job got serious, with people calling for advice on their sins and darker secrets. “I just want them to know that God loves them and that God cares,” she said. “We care about ourselves. There are times when we’ve given solutions to some people’s problems and answered the same problem for hundreds of others.”

Of course, running a TV network doesn’t come cheap. “I don’t believe in budgets,” replied Mother Angélique when asked how much it cost each month. His estimate – $ 290,000 to $ 350,000 – was gathered each month, from donations and rental of satellite and studio time.

And what about ratings, such an important measure of television success? “Your bible is the Bible, but there is a secondary bible on television called ratings,” Safer pointed out.

“Well, that’s your problem,” laughed Mother Angelica. “I never let that be my problem. I don’t know what my grades are. I just don’t think the Lord has counted heads.”

For the latest news and analysis, download the free CBS News app

A day in Burrendong with Tackle World