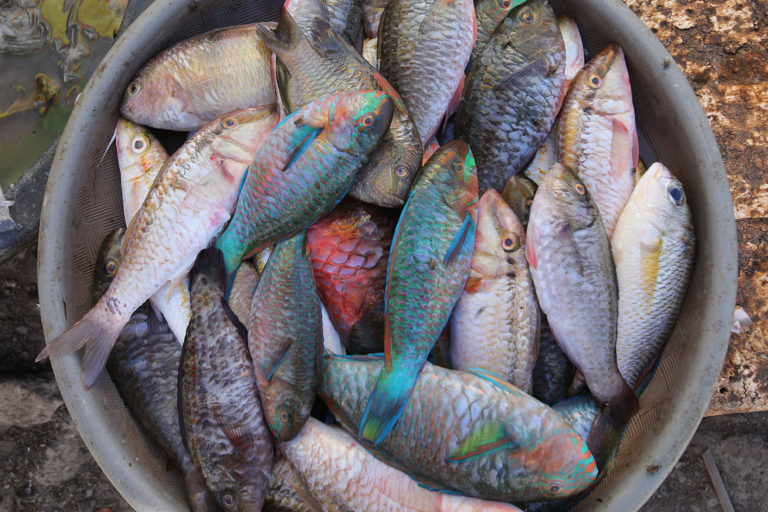 For decades, researchers studying the global fishing industry have had to contend with minimal data about what happens at sea. The surface of the ocean is so vast that most vessel activity, especially a once they are in international waters, are not recorded. Or at least it’s not recorded in a way that is accessible to scientific and public scrutiny.

The technological breakthroughs of recent years put an end to it. Marine scientist Boris Worm of Dalhousie University in Canada, who looks at 20 years of research in this field, calls the trend “one of the greatest revolutions in fishing.”

What has changed is that more and more fishing boats are equipped with a device that regularly sends a signal called an Automatic Identification System, or AIS. The signal carries information about the vessel, such as name, country of origin, speed and position. More and more satellites in the sky, put into orbit by companies like Spire and Planet Labs, exist to collect these messages. Today, the industry has reached a point where there is a fairly complete picture of where ships are located and where they were, at one point, encapsulated in billions of individual AIS signals. At the same time, advances in machine learning and artificial intelligence make it possible to see patterns in this data glut.

“I felt it was a game changer right away,” Worm said, recalling when a student graduating from his lab offered to study AIS signals. Worm and his team later learned that other researchers were on the same path, and they began to compare their notes.

Today, a wave of scientific papers are emerging that describe methodologies on how to work with AIS data and what the information reveals about global fishing activities. One group in particular, a collaboration between environmental watchdog SkyTruth, Global Fishing Watch and Google, helped lay the groundwork for analyzing AIS data. The group created algorithms that can be applied to large amounts of data to show the type of fishing activity, location or route of vessels, and made some of this data accessible in the form of a map. interactive.

One of the group’s recent studies, published in Frontiers in marine sciences, looks at one phenomenon in particular: a practice called transshipment, when a fishing vessel transfers its catch to a transport vessel with coolers on board instead of bringing it to port itself. Transshipment is generally not illegal per se, but this practice makes it more difficult to monitor global fisheries supply chains and tackle illegal fishing and illegal work, especially if transshipment events are not declared. Fishing vessels transhipping their catch can stay at sea for a long time without ever returning ashore, potentially trapping workers on board for months. If a refrigerated vessel makes multiple stops, the catch mixes up and its origin is obscured.

Based solely on AIS signals, the researchers were able to see where high volumes of transshipment occur and the countries of origin of vessels that tend to be involved in the practice.

One area of â€‹â€‹interest is in the southern Atlantic Ocean, in the Southeast Atlantic Fisheries Organization’s convention area, says Nathan Miller of SkyTruth, one of the leading researchers. of the study. AIS signals show that transhipment events appear to be occurring in this region, although this is illegal under the convention.

Another cluster of transshipment activity, Miller said, is in the northwest Indian Ocean, an area recently reported to be home to a growing and unregulated fleet of Chinese squid vessels.

Knowing the areas in which high volumes of transshipment occur can help authorities take action, for example by checking vessels when they come ashore. But the unprecedented level of transparency around activities like transshipment becomes even more relevant if you â€œturn the tide,â€ Miller says. Fishing companies that are committed to adopting clean practices can use the data to prove their track record, and those that continually have huge gaps in their records should justify it.

â€œWe can map entire networks and communities of good and bad actors, that’s what we’re thinking about now,â€ Miller said.

Worm’s lab study, published in Scientists progress at the end of last month, also used AIS data to examine the transshipment. It complements the work of Miller’s team by adding more detail on the types of vessels involved in this practice, which can help identify the types of fish they likely had on board.

The paper includes a detailed tuna case study, tracing the journey of albacore tuna “from the hook to a retailer’s shelf,” according to the authors.

“In this case, the individual fish travel about 17,000 km [10,600 miles] after capture, over a period of about six months, change boats, owners and processing facilities several times, â€write the authors.

Worm and his team were able to compare and supplement their findings with data provided by industry. â€œIdeally, every step of this complex supply chain is documented and recorded electronically, at sea and in port,â€ says Worm.

He says he hopes this type of work will lead to reform of the fishing industry and help fight fraud, which is prevalent in seafood all over the world. In Canada, where Worm is based, about 40 percent of fish are mislabeled, he says. â€œThe tuna in sushi is often not tuna; it is the escolar, an accessory species. And what is labeled snapper may be tilapia, a farmed fish.

But with AIS tracking, Worm says, the days of easy seafood fraud may be over. “[Fisheries] will look more like farming. When you buy coffee or tea, you can trace it back to the plantation where it was grown. Ultimately, each fish can be traced back to where it was caught, â€he says.

It does not specifically look at transhipment, but which countries dominate industrial fishing and in which areas they are particularly active.

For example, he found that vessels registered in relatively wealthy countries like China, Japan and Taiwan are responsible for the vast majority of industrial fishing traceable on the high seas beyond the borders of any nation. But they also dominated industrial fishing in domestic waters of less wealthy countries, indicating unbalanced exploitation of resources. This is of particular concern on the high seas, as high seas fisheries resources do not belong to a single nation, but are rather seen as an international resource that must be shared.

Learning more about global fishing models can help educate policymakers and consumers, Worm says. And research is only just beginning in this area. â€œWe’re just publishing these methods now,â€ he says. “AIS tracking will increase and become more sophisticated.”

Banner: A bucket of fish at a market in Labuan Bajo, Indonesia. Image by Rhett A. Butler for Mongabay.