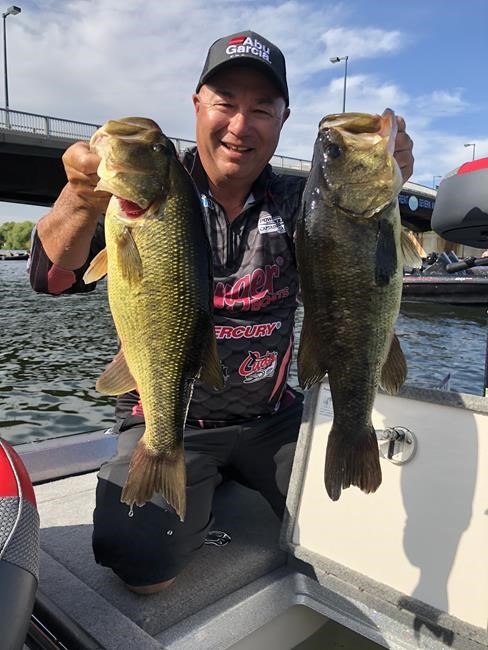 Last week, Izumi announced that her “Real Fishing Show” had come to an end after 38 seasons. It has sparked a flood of retirement wishes, but the affable 63-year-old native of Blenheim, Ont., will remain high in the limelight.

He will continue to work as a brand ambassador for his sponsors and has recently beefed up his social media presence, adding a TikTok account – Izumi has been on Facebook and Instagram – to provide content.

He is also involved in projects with LandPass – an exclusive app that connects landowners with hunters and anglers – as well as Izumi Aquaculture, a Burlington, Ontario company involving the brother/business partner of Izumi, Wayne, who turns gravel pits into fish. farms.

Izumi plans to continue fishing for bass tournaments – her longtime passion/addiction – while enjoying some quality time with her four-month-old grandson, Tommy.

“The word retirement is not really in my personal vocabulary,” Izumi said Thursday in a phone interview. “I will continue to work in the industry for as long as I can…I love the fishing industry.

“I’ve met so many great people in the fishing business and this industry and that’s one of the reasons I’ll never walk away from it.”

Izumi started the “Real Fishing Show” in 1983 to help support what he calls his “tournament fishing addiction”. The show would become the longest-running syndicated series in Canada.

“One of the main reasons I stayed there for so many years was to keep the fishing tournaments aside and let that help sustain it,” he said with a laugh. “But for me, it was time to get out of my comfort zone and move on while remaining relative to the fishing business through other channels.

“I also want to fish for fun, which for me is competitive tournament fishing, and I realize that there are only a few good years left to try and keep up with some of these youngsters who seem to dominate most events. “

Izumi said the global pandemic had no bearing on the timing of the move. He added that he decided in 2019 that it would be the show’s final year.

Izumi said that there are a lot of things about producing a TV show that viewers aren’t aware of. In recent years, Izumi had personally taken on the planning of venues, guests, and locations for each episode.

And then there was the matter of getting there.

“Most of the time when we were doing northwestern Ontario, we were driving there for 22 hours in a day and a half,” Izumi said. “We were shooting the day we arrived, finishing the show the next day and driving back.

“We’ve done that a lot and over the last few years, so, yes, there are parts that I won’t miss.”

Izumi often spent 300 days a year on the road and away from his wife, Sandy, and their two now grown children, Darren and Kristin. It’s not something Izumi wants to do now as a grandfather.

“I look at this little guy and I can’t believe how special he is,” Izumi said. “I was like, ‘I don’t remember those days when my kids were little because I was traveling so much.

“Yes, I had a good bond with my kids and still do to this day, but a lot of it happened when they were growing up rather than when they were little. That’s probably my only regret. I don’t want to miss it with my grandson I want to be able to take this little guy in the boat and have a connection with him.

But there are definitely elements of Real Fishing that the down-to-earth host will miss.

“What I will miss the most is all the wonderful people I would meet there,” Izumi said. “It’s all about the memories and we’ve made a ton of those over the years, that’s for sure.

“I will continue to make memories, but the show has allowed me to do a lot of checking on that to-do list.”

“Real Fishing” took Izumi around the world. He fished for marlin off the Great Barrier Reef, got tangled up in the Amazon rainforest several times with tenacious peacock bass, and waded for brown trout in Tasmania.

“I’m almost embarrassed to have to experience so many amazing things throughout my television career,” Izumi said. “It’s almost like I don’t want to feel like I’m bragging, but it’s embarrassing because it was so good.

“I don’t know if I deserved it, but I certainly enjoyed doing them.”

But for Izumi, nothing beats fishing in Canada and the variety of species available to anglers.

“I would come back from some of the most amazing trips and go off to a tournament and always be like, ‘The best fishing in the world is still here in Canada,'” he said. “You fish in Australia, Brazil, Venezuela, Spain, all these exotic places, and then you come back and look at the diversity of fishing that we have in Canada and you just shake your head.

“It was great to see all these other places and to be able to fish there…but it really is the best here.”

This report from The Canadian Press was first published on February 24, 2022.