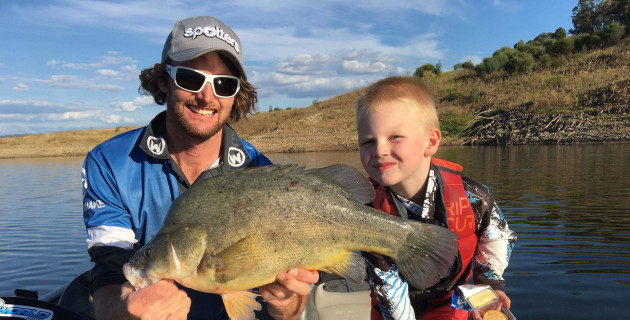 A day in Burrendong with Tackle World

TACKLE World opened its new store in the town of Orange, mid-west New South Wales, in December 2015. Ian Mclean, owner of Tackle World in Orange, is passionate about angling and , in just a few months, he had already signed up as the main sponsor of the Burrendong Classic. fishing competition organized every Easter at the dam. It was a fantastic commitment for a company in its early days.

Among the many awards presented at this year’s Classic was a day of fishing aboard the Tackle World boat, led by another passionate and talented fisherman – and Tackle World employee – Michael Collison. Also, one of the conditions for this award was that it had to be won by a junior angler and so the look on my five year old grandson’s face as his name was pulled out of the hat was absolutely priceless.

A month later, on a beautiful blue sky day, Josh and I met Michael at the Burrendong Dam ramp. Tackle World presented Josh with a beautiful Silstar Tactical one-piece rod with a pre-mounted Shimano Sienna reel with braid and leader, as well as a Tackle World Murray cod shirt and a fishing bag full of goodies including Berkley Gulps. , various hard bib lures and a bunch of blades. To top it off, the esky was full of salad buns, drinks, and day-fishing bites – these guys certainly know how to spoil a keen young fisherman!

Michael is one of the top anglers in freshwater competitions like the Australian Yellowbelly Championships (AYC) and recently won first place in the AYC Burrinjuck Round. His plan for the day was to roll Berkley larvae vertically through standing timber, a method that likely catches more golden perch consistently throughout the year than any other.

The first tree we scanned from the side showed fish standing everywhere at different depths of water. After locking over the submerged tree, we all dropped the larvae to the bottom and started to slowly move them up. The golden perch could be seen on the forward sounder following the bottom larvae, but there were only a few very hesitant hits. Thinking aloud about why they were so reluctant to bite him, I looked at the little backpack Josh had brought with him, treats packed for him by his mother for what was going to be a long day.

As soon as I opened the bag it was the banana disguised as a cake! A round table was held, discussing what to do with the vile offering. Michael, having previous experience with this kind of sinful business, offered to throw himself on his sword and consume the slice of the pie so that it wouldn’t bother us more. It was one of the bravest things I have seen in a life of fishing and sure enough as soon as he was done we got another drop for instant connection. Michael handed the wildly spinning rod to Josh to wrap it in a superbly conditioned golden pole!

Rolling larvae through the wood is quite exhilarating as it is a form of sight fishing. Michael targets fish he can see on his front sonar and can watch them larvae or sink to the bottom and can work the larvae in front of the fish – he can even tell you the approximate length of the fish on the sonar!

The rest of the day was spent with Josh battling the golden perch and the weird bluefin tuna, except for a lunch break where we walked the shore to stretch our legs and threw little plastics on cruising carp, where Josh quickly stretched out his arms with his legs! It was a big day for Josh and I and I was like a sponge absorbing as much information from Michael as I could take in. Josh, who had a big 12-hour day between pickup and drop-off, handled it well for a young guy who just turned five.

Rolling larvae through standing timber is undoubtedly one of the best safe methods of catching golden perch. Many people call this tactic “plucking” or “gulping” as the use of Berkley Gulp jigging worms caught on Â¼oz. jig heads produce incredibly consistently. Some fishermen say that any color is good as long as it is black.

Ian Mclean brings a lot of enthusiasm to everything he does and currently runs the Central West Tackle World Fishing Masters competition. It takes place in the surrounding local lakes and Ian is organizing a guided fishing trip from his shop for iconic species like Murray’s cod. Other species on offer will be golden perch, silver perch, catfish, bluefin tuna, European carp and trout. The methods of fishing for these species will apply to all forms of fishing, whether it is lure casting, plastic casting and even fly fishing. Keep an eye on the Tackle World Orange Facebook page for more details.

If you want a taste of the fantastic fishing that Midwestern New South Wales has to offer, I highly recommend you take part in this month’s round of the Central West Tackle World Fishing Masters held May 14 and 15 at the magnificent Wyangala dam (the Copeton of the south). Contact Ian Mclean at Tackle World Orange on (02) 6361 8924 or mobile 0478 083 066.